The Business “Blockade” started out of necessity, as knowledgable companies regarding foundation repair were very limited throughout Alberta and finding one to bid on our work plus provide customers with some type assurance they would be there in the future was almost non-existent. Un-officially, Blockade became a concept in 1995 and within five years it was being marketed as a subsidiary of W.E. Young General Contracting Ltd.

In 2019 Blockade absorbed the primary company and is known for quality foundation repairs, re-grading and hardscaping of yards.

Following long known principles and through education and new technologies Blockade strives to be the best at what we do.

Letting go of some of the past may never happen as the skilled trades and time invested in learning what goes into building a structure is what makes us unique. This skill has been invaluable to our clients as knowing the technical aspects of building construction allows us a perspective that many others do not have.

Our number one difference is that we always maintain that there is * cause and effect. Naturally most clients will side with the least costly suggested repair without even taking into account that everything fails for a reason. Granted… and we understand and do sympathize with the need to do the best with what can be afforded. This is why we do leave it up to the client to make the educated decision on whether to correct the cause as well as the effect when recommending a repair.

What is: * Cause and Effect

Cause and effect is the relationship between two things when one thing makes something else happen. ... Looking for the reason why things happen (cause/effect) is an unspoken universal law. Understanding the cause/effect when it comes to the failure of a structure is not always obvious and sometimes requires looking at all the possiblilties rather than suggesting all failure are cookie cutter reasons...

The effects is what causes alarm. Listing a few:


Vertical cracks near an opening.

Cracks seen on the exterior of a foundation, 8-10 inches in from the corners.

Seperation at the joist line between the foundation parging and the stucco at the center of a long span wall.

Spalling of concrete exposing rebar that is rusting.

Seperation between the foundation wall and the footing.

Cracks in the floor of a basement.

The causes that are often overlooked. Listing a few:

Overdigging the depth of a foundation during construction.

Large tree canopies and root systems to close to a home.

Chloride contamination of the concrete.

Infective or lack of weeping tile or drain systems.

There are as many causes for a foundation failing as there are solutions.

This is an extreme example of a degrading foundation. The walls are cracked vertically and horizontally.

At the grade level and below, you can see how the concrete surface is spalling and how the mixture of sand and stone is actually crumbling in the corner. It has the appearance of an eroded mountain base. As the seasons pass the rock breaks away and falls. This is very similar.

Looking down to the floor, it can be seen that the floor too has cracked and moved. This could be described as a mountain range being formed. Forces from below push up at the concrete floor, in this case it would likely be water being absorbed in the lower layer of expanding clay that push the floor up. This is just one example to why this is happening. If evidence could be found that the house was without heat for a season or two, that could explain the cause as well. Or maybe a bad mix of concrete, the concrete may have been made using non-pottable water or silted sand and stone mix. There are many possiblities.

These walls and floors would be considered as having catastrophic failures. The concrete can be picked away with a pencil tip… that’s not good. 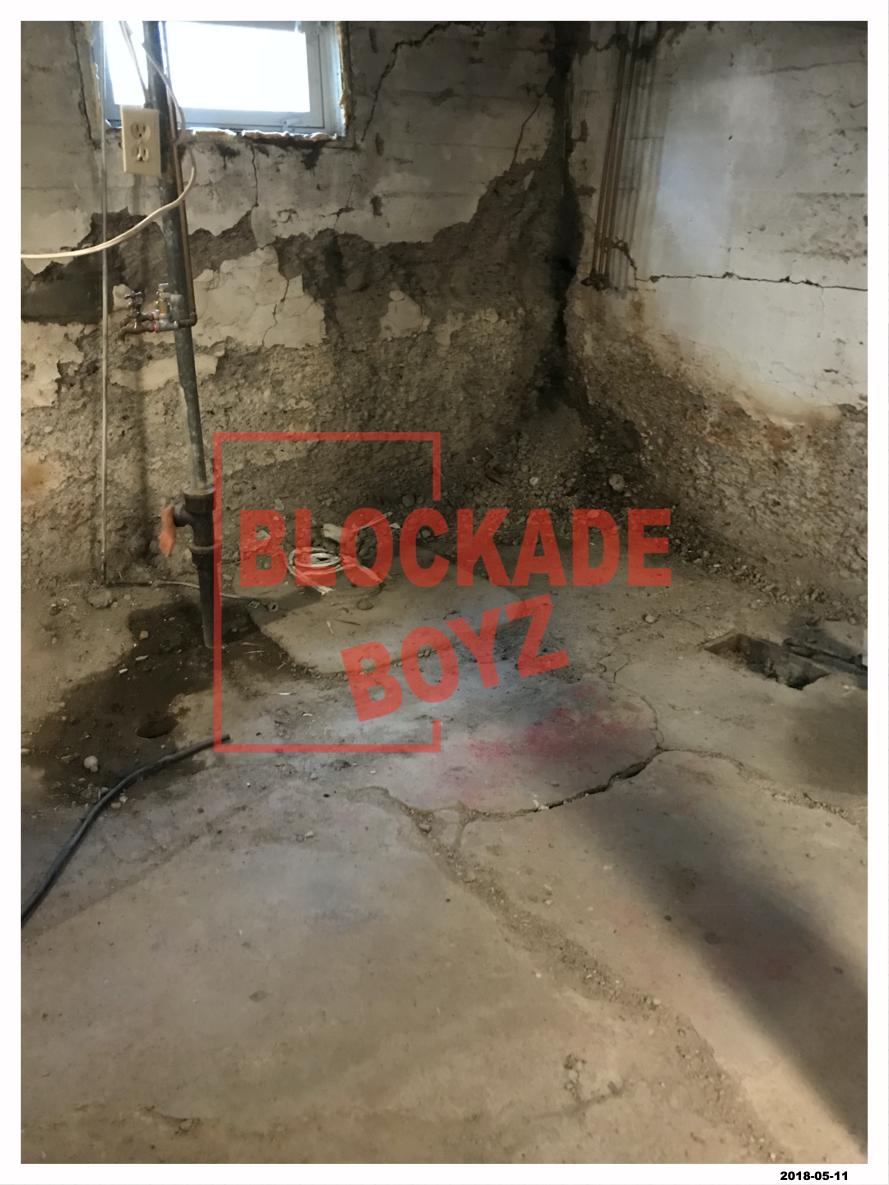